As you may know (or not, in which case please read this article), CLV is one of the most important metrics for your store. Not only does it help you know your store’s actual value, but it is also key as to how much money you can spend in acquiring customers, for it tells you how much money they’re gonna ‘give you back’.

Ironically, though, CLV is one of the most under-estimated and overlooked metrics. Many startups don’t even calculate it, and many who do only sum all the revenue they’ve ever had and divide it equally between all users.

This approach however not only is pretty basic, but it deliberately lets out a key piece of truth: not all customers are equal. You’ll have people who buy $1,000 from you, but you’ll also have customers who only came in attracted by a massive discount, and won’t buy again unless they again see an insane price drop.

Does it really matter? Absolutely.

First of all, bad customers can be very bad business: by giving huge discounts, and adding all the marketing and operations costs, you can easily be left without profit, or even lose money acquiring those cheap customers.

So, you’ll want to identify the kind of customers who will bring you more money in the long run, and bring more of them, as many as you can. As for the low quality customers… You’ll want to bring as few of them as you can.

However, to do this, you can’t be just looking backwards and seeing how much people end up spending on your site when there’s nothing more to do. To actually take action, you’ll need to know both how much a customer has spent and how much he will spend in the future.

Sounds impossible, doesn’t it? It’s not. We created a tool that tells you exactly how much revenue each one of your customers will bring you in the future, and when they will do it. So you can pamper those good customers, create stronger bonds with them and upsell… And stop worrying and losing money over the bad customers.

You can expect 2 very different things from our model:

1) Forward-looking (predicted) values
We predict for you:

2) Backward-looking (historical) data.
All of the above are things we’ll predict from the future… But we’ll also give you insights on what has already happened in your store:

As it does involve quite some math, we’ll explain this in 2 leves of complexity, so if you don’t really want to know exactly all the details of our calculations, you can read only the basic explanation and you’re good to go.

The short version is we do mathematical modeling with your data. Modeling (in math) means watching the past behavior and using it to predict the future behavior of a person or group of people. That’s what we do: we take your past data, feed it to a model, and out come the predictions. We use 2 models: the first one to know when people are going to buy, and another one to know how much money they will spend in each of those orders. The models we use are like superstar for calculating CLV: they were developed by mathematicians and backed up by more than 20 years of research, so you can be assured they work damn well.

If you want to know a little bit more, we’ll tell you not all modeling is good. If you do it wrong, you can end up with predictions that have nothing to do with reality. For example: if your predictions are way lower than the actual facts, you’ll end up with a massive shortage of inventory, which means you’ll ‘lose’ the money you could had made by selling those units. This is called opportunity cost. If on the contrary you predict sky rocketing sales, you’ll both have lots of inventory that won’t get sold, and most likely also spend lots of money in advertising, so you’ll actually be losing money on two fronts.

Worried? Don’t be. As we said before, the models we use were developed and perfected by PhD mathematicians form universities like MIT, and are featured in many scientific publications in respected science magazines like Elsevier. In this section we’ll explain the first model, called Beta-Geometric model (for short BG). This is the one used to know when and how many times people will place an order. The second model we used is called Gamma-Gamma, but we won’t go over it in this section.

Every single model makes assumptions about the data. These are the cornerstones for defining the whole model. Depending on how accurate (or not) these assumptions are, things can go really well (or not).Our assumptions involve probability distributions. This is where things start to get a bit technical, so if you think you’ve read enough, just skip to the next section.

Before we move on, we want to state a simple but crucial fact for all CLV calculations: not all customers in your database are worth the same, and not all of them are active. There are many who have already bought what they needed, and won’t ever buy again. And it’s ok. It’s only natural. What you want to do, however, is a) stretch the time during which they’ll come and buy (their lifetime), and b) make them buy as much as you can during that period (their lifetime value, or CLV). That’s the notation we’ll use: active are the customers who will still make another purchase with you. Churned, lost or inactive customers are the ones who won’t ever buy again.

Ok, so, moving on. These are 5 key assumptions we make:

Which curve, though, that will depend both from that particular customer, and from your business model. Poisson distribution has 2 parameters, λ and k, which determine what we could call the ‘amplitude’ and ‘wavelength’ of the curve.

Here, λ is the transaction rate of your customers, ie, how many times they buy in a given period of time. When you model something using a probabilistic distribution, what you do is called ‘fitting the parameters’ λ and k, to find the pair that best adapts to every customer.

This curve is similar to the Poisson one. This distribution also has two parameters, and it will model how the λfrom the Poisson distribution varies across customers. A way to understand this is that the horizontal axis is how many times they buy from you (eg: 5 purchases), and the vertical one how many customers fall into that category (how many of your customers place 5 orders during their lifetime).

The geometric distribution is a special case of the Poisson. Here what we basically assume is that after the first transaction, probability of churning (or never returning) is much higher tan after a couple (or a lot of) purchases. The probability is always greater than 0, but is much smaller as time goes by. Again, this is a fair assumption for the more a customer buys with you, the more loyal he becomes to the brand. After all, there’s a reason why (s)he keeps coming back, right? 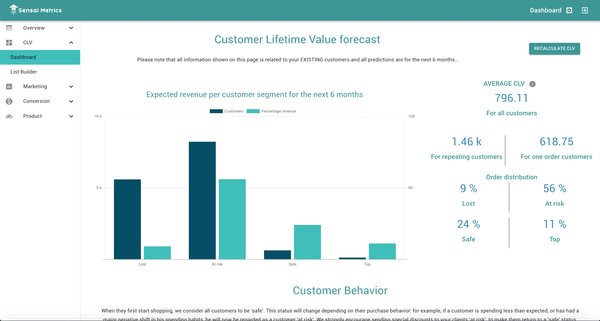 In our previous posts we explained the importance of customer segmentation, and the model we use to predict your customers' LTV. Here, we explain what to do with this information.

Every single customer in your store behaves differently. Perhaps Patrick comes in and buys from you once a week. And Ana may have a slower purchasing rate, buying only once every 2 months. This, however, doesn’t mean Ana isn’t faithful to your